About Titus and His Ministry

Titus Sikawa and his wife Mandomi were both born in villages that lie between Mt. Meru and Mt. Kilimanjaro in the Arusha Region of northern Tanzania. Arusha is a tourist hub, and had the attention of the world when the United Nations held its Tribunal Court for the genocide that took place in Rwanda and Burundi in 1994. The Lord has blessed Titus and Mandomi with 8 children, 5 boys and 3 girls, and grandchildren.

Both were born into Christian families and Mandomi’s grandfather was the famous Evangelist Yohane Ndosi. Both their grandparents accepted the message of salvation that was brought to Tanzania by German Missionaries from Leipzig in the late 1880s. Titus’ father, the late Mzee Andrea Sikawa, struggled hard to learn reading and writing under the German teachers, and he later started missions in Ngabobo near Mt. Kilimanjaro.

Titus was touched by the Word of God at an early age. When he was 8, Titus heard his mother talking about going to Moshi to attend a large meeting with the famous American evangelist, Dr. Billy Graham. Titus asked his mother if he could join them. His mother refused, fearing that he might get lost in the crowd. But as his mother left with other ladies to walk five miles to catch the bus to Moshi, Titus followed them without their knowledge. When the bus arrived, Titus showed up and it was not possible to send him back. They arrived in Moshi and the preaching and music touched Titus’ heart. When Dr. Billy Graham invited his listeners to receive Jesus, Titus raised his hand. The seed was planted, and, later, at the age 17, Titus accepted Jesus Christ into his life and became a born-again Christian.

Later still, Mandomi was a primary school teacher, and Titus was a secondary school teacher, but in 1986 the Lord opened an opportunity for him to attend Tyndale Theological Seminary in the Netherlands. Three years later Titus graduated with a Master of Divinity Degree. He returned home and, with very few resources, started a vocational center where he has been training students with basic skills and a Bible education. Eventually, the Bible education branched out to become Rehoboth Bible School where the students are taken to various places like open markets to share the Word of God.

In 1993 the Worldwide Evangelistic Church was started and was officially registered in the United Republic of Tanzania for the purpose of spreading the full Gospel of our Lord Jesus Christ. Titus, together with other committed pastors, has planted and built many churches in Tanzania. WWEC currently ministers in Arusha, Manyara (among the Masai tribe). Kilimanjaro (Rombo District) and Singida.

Please pray for this ministry that it will continue to change lives in northern Tanzania.

Tanzania is located on the eastern side of Africa, facing the Indian Ocean. It also borders Kenya and Uganda in the north; Rwanda, Burundi, and Congo in the west, and Malawi, Mozambique, and Zambia in the south. Tanzania’s economy relies heavily on agriculture, and is home to about 43 million people. Tanzanians belong to about 123 tribes, all speaking different dialects, but they are united by one common language—Swahili, a phonetic language spoken by more than 100 million people.

Tanzania is one of the most peaceful and beautiful countries in Africa, rich with wild animals and home to majestic, snow-capped Mt. Kilimanjaro, the highest mountain in Africa. When people visit the Serengeti and Ngorongoro Crater, they may think that Noah’s Ark emptied there after the Flood. Tanzania is also the home of a rare gemstone–Tanzanite, found nowhere else but in Tanzania. Keeping watch over this diverse land is a democratic government whose leaders are elected every five years.

Within Tanzania, there is a variety of religious beliefs. Since only about 33% of the population is made up of Christians, there is a need for the Word of God in Tanzania. 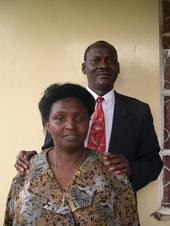 Psalm 125:1
They that trust in the Lord shall be as mount Zion which cannot be removed, but abideth forever.